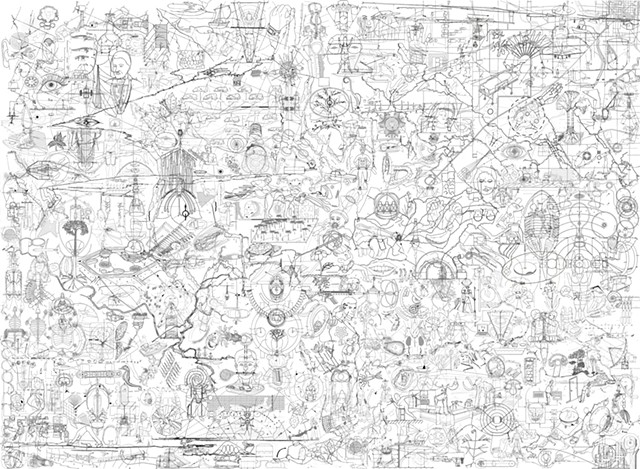 Artist Statement - Ravelling Enunciations Diagrams are technical drawings that are intended to convey information, whether it is scientific information or as an technical illustration. In my artistic practice, I am particularly focused on medical and scientific diagrams, or patent diagrams that are connected to medical devices or products that are intended to correct or enhance life experiences for disabled or chronically ill folks. The intention of a diagram is to describe something in a very straightforward way through a drawing. But in order to do that, diagrams must not have any ambiguity that might be distracting from the actual information conveyed (i.e., the product itself). In this sense, when humans are involved in the image, the go-to human figures depicted in diagrams are generally White, male, and able-bodied (and seemingly able-minded). The assumption in doing this is that the whiteness, the maleness, and the abledness are invisible so the focus can be on the actual information that is being conveyed in the depiction of the human interacting within the diagram.

In the beginning I started experimenting with creating digital collages digitally from these thousands of diagrams I had been gathering online. These small collages usually became an exercise in twisting or subverting the perceived neutrality or normality of each individual image. When the individual diagrams are collaged, they become something that forms beyond its original intent and function. It mutates out of the range of rationality or normalcy. After some time, the diagram collages began to sprout from there. It become a kind of uncontrollable and almost-grotesque outgrowth, that has been expanding ever since. In a sense this process speaks to a kind of push and pull, such that on one hand the artistic process is a rather obsessive and rigidly structured and intensely fast-paced in its creation in a digital space. It became a repetitive routine that, for me, is at once calming while indulging that structure and rigor is very often required for me to keep from falling into chaos that a neurodivergent life can often become. On the other hand, this work also becomes and embraces chaos in a visual form.

Observing the large-scale diagram collages from a distance, they indulge in the chaos, and the scatteredness, and the seemingly uncontrollable outgrowth and explosion of discrete quote-unquote ‘rational’ images. Then when it is observed up close, the strictly informational images become entangled and distorted into something that’s irrational and nonsense. Within a critical disability studies context, irrationality and nonsense to me have positive values. As a Deleuzian concept, nonsense is not the opposite of sense, but instead it’s sense that’s on unstable or fluid ground. To me, this encapsulates the lived experience of neurodivergence and disability.

Over the past two years, I have been turning to painting to expand the diagram collage work. Painting offers a very different space and pace of artistic practice compared to the large-scale digital collages. Instead of the speed and intensity of collaging dozens or even hundreds of images in one sitting into a digital collage space, painting embraces the polar opposite in its analogue and extremely slow process that takes many weeks to complete one work. In this sense, critical disability studies allows me as an artist, in one respect, to embrace and work reflexively thought the push and pull of living as neurodivergent in a compulsory able-bodyminded society. But, in another respect, through the subject matter of these source diagrams, it also works toward revealing how pervasive ableism is in that it’s even ingrained in such nuanced ways as in how it’s depicted in something as seemingly benign as a patent diagram or a medical illustration.

The word “ravel” can mean both to unravel (or disentangle) and to tangle or entangle. While the diagrams are disentangled from their original rational scientific meanings, they are also re-entangled into new narratives that create multiversal and non-rational meanings that venture beyond postmodern or altermodern critiques, and instead embraces “enunciation” over representation, for which decolonial theorist Walter Mignolo calls “a world that is constantly invented” rather than preexisting. Similarly, but from a western philosophical view, Gilles Deleuze views enunciations as expressions that ‘disarticulate’ and deterritorialize the universal, normative and hegemonic territory of the root tree of universal knowledge. The non-representational image of the ‘rhizome’ is not one that replaces the tree of western representation, but rather it emerges, skews, subverts, disrupts, and invents “nonsense” to traverse and weave in and out of the universal through the ravelling enunciations of the mulitversal creation of as-of-yet known knowledges.